On July 24th 1993, Microsoft finalized the first release of Windows NT, labeled version 3.1 “to avoid confusion”. This was a big day for Microsoft, although the practical impact on the computer industry was not particularly big, at least not immediately. 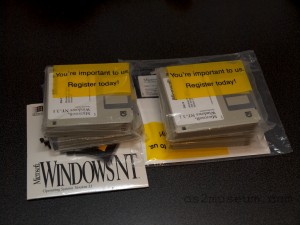 After years of hyping up a vaporware product originally known as N-10 and NT OS/2, Microsoft finally laid its cards on the table. Windows NT 3.1 was a modern 32-bit, portable operating system, with support for multiprocessor systems. It was designed by a core team of mostly ex-DEC engineers, all experienced system developers, led by David Cutler. But with its 12MB minimum RAM requirement (x86 version; 16MB for the RISC version), NT 3.1 was never going to be anywhere close to a mainstream OS—not in 1993 when MS-DOS and Windows 3.1 reigned supreme. 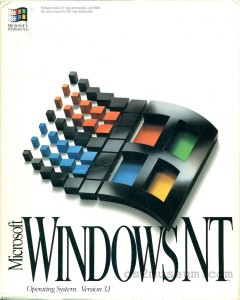 The first NT release supported systems based on Intel 386/486/Pentium, as well as MIPS RISC processors. This was a crucial long-term hedge, a way to ensure Microsoft wouldn’t be left behind in case RISC processors took over the personal computer space from Intel, as pundits widely predicted at the time.

Visually, Windows NT 3.1 looked very much like Windows 3.1, even though the core OS could hardly be any more different. The well designed multi-threaded, pre-emptive multi-tasking OS with a microkernel-like client/server subsystem architecture did not remotely resemble the evolved-not-designed mess of MS-DOS + Windows 3.1.

At the time Windows NT 3.1 was released, no one at Microsoft probably realized that it would take almost 10 long years before Windows NT would finally completely take over from Windows 3.1 and its progeny (then known as Windows XP). 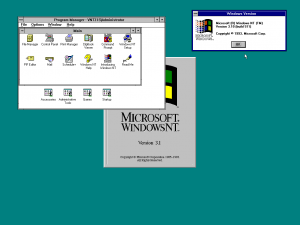 For Microsoft, Windows NT 3.1 also played a more short-term strategic role. After Microsoft turned its back on OS/2, the company found itself without a platform for its flagship server products, LAN Manager and SQL Server. Due to the major delays in Windows NT development, Microsoft was forced to continue selling the 16-bit OS/2 1.31 as that was the only server-capable OS Microsoft had at the time (having dumped XENIX a few years earlier). IBM’s 32-bit OS/2 2.0 was out for over a year by the time Windows NT 3.1 was released; IBM already had an improved OS/2 version 2.1 out before NT 3.1 even arrived.

But with Windows NT, Microsoft finally had its own foundation for LAN Manager and SQL Server. In fact the LAN Manager server was built into Windows NT Advanced Server and was no longer marketed separately.

Windows NT 3.1 faced the usual problems of new operating systems—spotty hardware support, dearth of native applications, relatively poor performance and less than 100% reliability. Combined with the (for the era) very high hardware requirements, this led to rather slow adoption rates.

Nevertheless, Windows NT 3.1 did enjoy moderate success in the server market where the hardware requirements were much less extreme—relatively to the server equipment available at the time. It’s probably fair to say that the first victim of Windows NT was Novell NetWare, despite Novell’s huge initial lead.

It would be difficult to call Windows NT 3.1 a successful product, but it was an inauspicious beginning of a phenomenally successful Windows NT era. The effect that the Windows NT line had on the computer industry over the past 20 years is difficult to overstate. David Cutler and his team did their job well.

This entry was posted in Microsoft, NT. Bookmark the permalink.

6 Responses to Twenty Years Ago Today…