So I have that old Intel D865PERL board, which is a Socket 478/AGP board. There’s a 3.2 GHz Northwood in it but of course I was wondering, what’s the fastest CPU this board supports? And it turns out to be a question which is not so easy to answer.

The fastest clock speed supported by the board is easy to figure out: 3.4 GHz, with 800 MHz FSB speed. But there are three different 3.4 GHz CPUs that the board supports: Intel calls them Pentium 4 3.40 GHz, Pentium 4 Extreme Edition 3.40 GHz, and Pentium 4 3.40E GHz. These are also known as Northwood, Gallatin, and Prescott, respectively—with the minor caveat that Intel’s ark calls the Extreme Edition variant Northwood while others call it Gallatin. 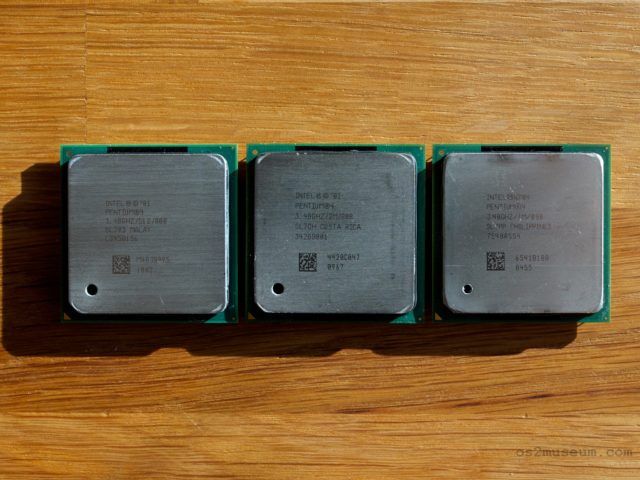 The Gallatin variant is essentially Northwood with additional 2 MB of L3 cache (a Xeon in a desktop package), both manufactured on the 130nm process. The Prescott is an updated design with double the L1/L2 cache and added SSE3 instruction set, and manufactured on the 90nm process. Note that Northwood/Gallatin CPUs display a 2001 copyright label on the heat spreader while Prescott has a 2004 copyright. All support Hyper-Threading, MMX, SSE, and SSE2.

I used two simple benchmarks for comparing the processors: CPU-Z 1.77 and 3Dmark 2001 SE (with a fast graphics card, 3Dmark is rather sensitive to CPU performance). The board I used for comparisons was not the D865PERL (Rock Lake) but instead a rather similar Intel D875PBZ (Bonanza) with a Radeon HD 4670 running Windows XP.

In CPU-Z, the results were straightforward:

The Northwood and Gallatin have more or less identical results because they use the same core and the test clearly doesn’t benefit from the L3 cache. The Prescott has bigger L1/L2 cache and especially the multi-threaded performance shows a significant improvement. In other words, newer is better.

Hmm… the Northwood comes in last again, but the Gallatin beats the Prescott by a decent margin. That L3 cache really does something, after all.

So in the simple CPU-Z benchmark, the Prescott has about 6.5% better single-threaded performance than the Gallatin, but in 3Dmark (and that’s a 3D benchmark, not a pure CPU benchmark) the Gallatin is 10% faster than Prescott.

In other words, the answer is (as it so often is) “it depends”. The Northwood has no advantage over either of the others (other than a slightly lower TDP, see below), but depending on the workload, the Prescott can benefit from the improved architecture and doubled L1/L2 caches, or the Gallatin can take advantage of the relatively big L3 cache and easily beat the Prescott.

The 3.4 GHz Northwood has slightly lower TDP (89W) than the other two (103W and 102.9W), but it’s not a big difference. The Gallatin is nowadays considerably harder to find than the Prescott or Northwood, and may be also considerably more expensive, but doesn’t have to be. Back in the day, the 3.4 GHz Socket 478 Gallatin’s list price was $999 while the Prescott was listed at “only” $417.

This simple and unscientific benchmark illustrates that Prescott was not a particularly successful design. Despite the process shrink, it put out more heat than a Northwood at the same clock speed, presumably due to the larger caches. That earned Prescott the “PresHot” nickname. Intel was also quite unsuccessful in scaling the clock speed. While Northwood went from 1.6 GHz all the way to 3.4 GHz, Intel hit a wall with the Prescott and only released CPUs with up to 3.8 GHz clock speed. While the Prescott saw the addition of 64-bit architecture (AMD64 compatible) and virtualization (VT-x), it was not a great performer, only a great Watt-gobbler.

Summary: The coolest (in a very strictly metaphorical sense) Socket 478 CPU is the 3.4 GHz Extreme Edition Gallatin, but the 3.4 GHz Prescott is much easier to find and may be either slower or faster depending on the application.