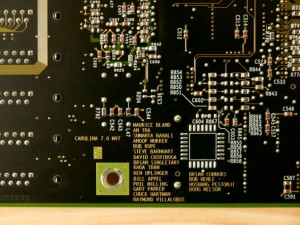 Anyway, my Frankensystem has a board FRU 12H0818. According to the EPRM, that’s a type 6070 (Power Series 850) system board. Except for the part number, it’s not apparent what differences there might possibly be between the 830 system board and a 100MHz 850 board. At any rate, the real surprise was waiting under the heatsink:

That’s right—a 133MHz PowerPC 604 processor. It’s worth noting that the 100/120/133MHz boards were separate part numbers. The CPU frequency does not appear to be user modifiable which would explain the need for separate boards (even if all of them actually used the same CPU model).

A better question is why IBM sold high-end 133MHz processors as 100MHz. I have no explanation for that, although it is not an uncommon practice within the industry. Sometimes the yields are good and there’s a shortage of cheaper/slower chips, so faster chips are sold as slower ones. However, the CPUs are then typically labeled as the slower parts and nowadays also multiplier locked. In this case, IBM may not have bothered since the CPU is soldered and effectively locked.

This entry was posted in IBM, PowerPC. Bookmark the permalink.

6 Responses to The Carolina Mystery