On some systems, it has been observed that Solaris 7 panics during boot from installation media and reboots the system. At least Solaris 7 U1 (3/99) and U4 (11/99) are affected. Only “fast” systems (definitely including Sandy Bridge 3+ GHz processors) exhibit this problem, and the exact behavior depends on hardware configuration.

When booting with kadb, the system doesn’t reboot itself and the panic information can be easily read: 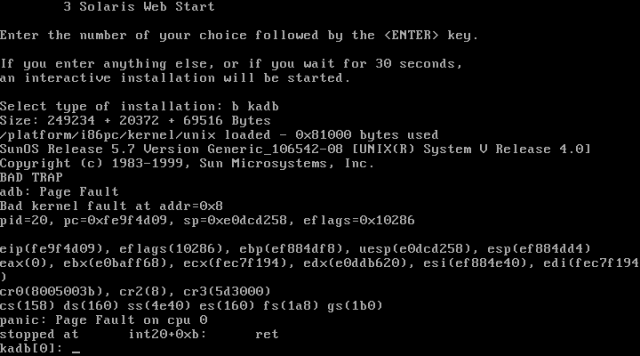 Clearly a page fault caused a null pointer dereference… but why?

The problem is an “obvious” coding error that lay dormant for some time masked by slow hardware. A stack backtrace gives a better picture of the problem: Solaris maintains a table of kernel symbols which needs to be updated when kernel modules are loaded/unloaded. To avoid unnecessary CPU load when many modules are quickly loaded/unloaded (especially during system boot), the OS ensures that at least one second elapsed between symbol table updates.

Astute readers are probably starting to smell a rat. Yes, Solaris 7 also waits for a second before the first update. Until that update runs, the ksyms_table pointer is NULL and if an attempt is made to access the symbol table, the kernel will panic. Duh!

As mentioned above, exposing this race condition requires a sufficiently fast system, probably considerably faster than what was available when Solaris 7 was released.

That will remove the 1-second symbol table update delay and the panic will be avoided. Once Solaris is installed, the problem is unlikely to occur.

This entry was posted in Bugs, Debugging, Solaris. Bookmark the permalink.