After a long while, I dusted off my Roland SC-8820 sound module which I bought used about 10 years ago. The goal was to drive it from an older PC via MIDI. This turned out to be a lot harder than expected, all because of a power supply. 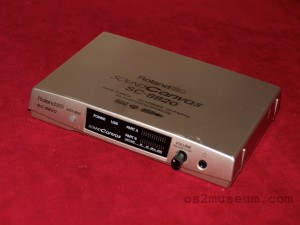 Yes, the SC-8820 can easily operate on USB power. But there’s a catch. On the back of the unit, there’s a little switch that controls whether the module takes input from USB, PC or Mac serial ports, or MIDI connectors. So I switched it to MIDI, fed it some data, and got absolute silence.

After brief head banging, this turned out to be a documented feature (not a bug!). The manual is fairly clear that when operating on USB power, the input selector switch does nothing and USB input is always used. This was probably intended to make things easy for USB users and make the module work regardless of the switch setting. It means that to use the MIDI inputs, the unit must not run on USB power. OK, off to find a power supply.

The SC-8820 (and many other Roland/Boss devices) has a standard 9V DC jack. I plugged in a no longer used 9V power supply from an external USB disk. The SC-8820 was unimpressed. OK, maybe the adapter was bad…

I also happened to have an old Yamaha keyboard around and could easily borrow its (likewise 9V) power supply, so I tried that next. The SC-8820 still didn’t power up. Since the SC-8820 worked fine on USB power (apart from the input source restriction), it couldn’t have been completely broken, yet with the external power supply didn’t even blink.

At that point, I started paying more attention to the diagrams on the back of the SC-8820… 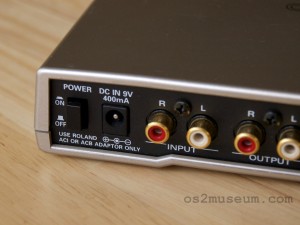 …and on the power supply used with the Yamaha keyboard: 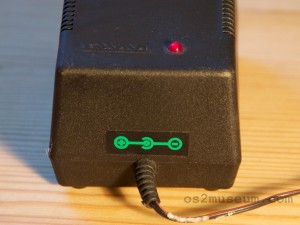 Why did they do that? Some think it’s just a way for Roland to extract more money. That is possible, but there’s some evidence that the reversed polarity is or at least was common in Japan, so perhaps the incompatibility was not intentional. If anyone knows the real reason, I’d like to hear about it.

Needless to say, there are adapters available to reverse the polarity… but you have to buy one first. Or re-solder a power supply. Oh well, another lesson learned.

Incidentally, getting the SC-8820 going with Windows 7 was another obstacle course. There are (both 32-bit and 64-bit) drivers for Windows Vista, but the driver installer refuses to run on Windows 7. However, it is possible to force Windows 7 to pretend it’s Vista and then the drivers do install and work. It’s just the installer being a bit paranoid.

With the driver in place, one is faced with the fact that Microsoft ripped out the MIDI related control panel bits in Windows Vista, and 3rd party software must be used to convince post-XP Windows to play on a device other than the built-in software synth. Mind you, the machinery is still all there, just the user interface is missing (how’s that for backward compatibility?). In the end, Windows was defeated and the SC-8820 works as it should:

Credit for the above MIDI conversion goes to Rosemary in Australia. The MIDI file was played by Windows 7 Media Player connected to the SC-8820 via USB.

This entry was posted in MIDI, Roland, Sound. Bookmark the permalink.