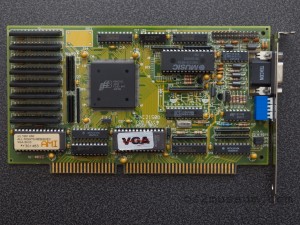 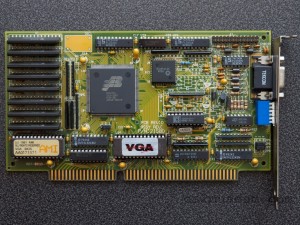 The PCB is the same, the BIOS chips look the same, the DAC is slightly different but an 80 MHz part in both cases, memory is the same… but wait—the graphics controller is different! The top specimen is equipped with the original S3 86C911 accelerator, while the bottom one uses the newer and improved S3 86C924 with added 24-bit true color acceleration.

What the card really is and who made it is an interesting question. The one identifying mark is “P/N 2150D”, which according to TH99 means this is a S3-911 based graphics card by ESCOM AG (clearly not quite right in the second case!). Given that ESCOM was a German system builder who generally did not design PC components, it’s rather likely that ESCOM sold the card but it was made by some other company.

These graphics cards were both made in the second half of 1992 and are good examples of early S3-based PC graphics accelerators. Both use an 80 MHz DAC and 1 MB VRAM (not DRAM). And they show that more or less no-name (probably Taiwanese) OEMs could build relatively high-end graphics cards based on the S3 chips back in 1992.

The VGA function on these cards is quite slow, in fact noticeably slower than even cheap basic SVGA cards such as Acumos/Cirrus Logic AVGA2/CL-GD5402 from the same era. The accelerator presumably did rather better—after all, S3’s line of graphics accelerators which started with the 911 was quite successful.

For the interested, here are close-ups of the two chips: 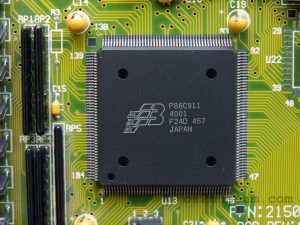 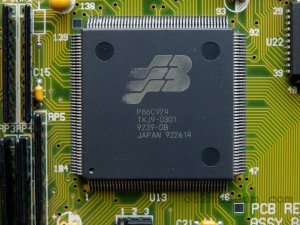 If someone knows how to decipher a date code from the 911 chip, please leave a comment. It would be interesting to know if the 911 is actually older than the 924 or not.

This entry was posted in Graphics, PC hardware, S3. Bookmark the permalink.