I recently tried to install the infamous Lotus 1-2-3 Release 3 from 1989 in a VM. The program disks included both DOS and OS/2 executables, and both were failing. The DOS version stopped with “Cannot initialize system driver” immediately after showing the splash screen, while the OS/2 version failed with the message “Error loading driver file LTSNW” at about the same point. Google was of no help whatsoever, as often happens with software that old.

The OS/2 problem was easy to fix. For some reason, the 1-2-3 installer does not modify OS/2’s CONFIG.SYS to make sure the C:\123R3 (or equivalent) directory is on the LIBPATH. When 123OS2.EXE attempts to dynamically load LTSNW.DLL (apparently some sort of a Novell NetWare interface library), it will fail. Editing LIBPATH appropriately is all it takes to fix the problem. On some systems, LIBPATH contains the current directory (“.”); in that case, 1-2-3 starts as long as it’s launched from its own directory. 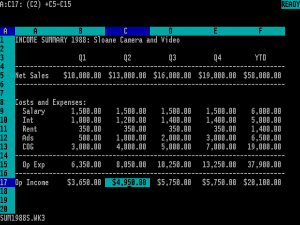 The failure of the DOS version was a much tougher nut to crack. The error message was rather non-specific. No version of DOS and no memory manager configuration I tried solved the problem, they all failed in the same way (except in a DPMI environment, 1-2-3 R3.0 refused to start outright, as it requires VCPI). I had a hunch that the issue might have something to do with the BIOS used by VirtualBox, specifically with the contents of the interrupt vector table (IVT).

I tried making sure the last vector (FFh) in the IVT is empty (contains zeros) and voilà—Lotus 1-2-3 R3 started up! But that didn’t make sense… because on many systems, the last portion of the IVT is used as a temporary stack by the BIOS, and the contents of the last 30 or so vectors are unpredictable. Then I tried modifying the contents of other vectors and found that zeroing vector 81h also allowed 1-2-3 to run.

The problem was that neither vector FFh nor 81h has any particular function, certainly nothing even remotely relevant to 1-2-3. In the end I looked at the disassembly of LTSSYS.DLD and realized that 1-2-3 R3 looks for unused interrupts in the 81h-FFh vector range. It doesn’t matter which vector is unused (zeroed), but at least one vector in that range must be available; if it’s not, the LTSSYS.DLD module (the “system driver”) will fail to initialize. 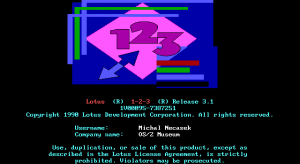 Note that 1-2-3 R3.1 (shown above) may require more unused vectors in the IVT, but for R3.0 one is enough. Release 3.1 also includes a newer version of the DOS/16M DOS extender with support for DPMI, and can thus be launched in DPMI environments such as Windows 3.1.

This entry was posted in DOS, PC history, VirtualBox. Bookmark the permalink.