When attempting to determine when exactly the network redirector interface was introduced in DOS, the situation seems to be quite clear. Available literature agrees that DOS 3.1 (released in April 1985 by IBM, possibly earlier by Microsoft OEMs) was when redirector support was introduced. Advanced MS-DOS Programming says: “MS-DOS version 3.1, which was released in November 1984, added support for the sharing of files and printers across the network.” The Wikipedia article on PC DOS (as of May 30, 2012) claims that “Planned networking capabilities in DOS 3.00 were judged too buggy to be usable and Microsoft disabled them prior to the OS’s release.” The famous Ralf Brown’s Interrupt List (RBIL) documents redirector hooks (INT 2Fh/11h) as being called by the “DOS 3.1+ kernel”. Undocumented DOS (2nd Edition, page 494) mentions that “Microsoft has used the redirector interface since DOS 3.1”. Microsoft’s documentation for the MS-DOS CD-ROM Extensions 2.1 (MSCDEX) says that the “product uses the Microsoft Networks interface to MS-DOS so it requires MS-DOS version 3.1 or higher”.

It all seems very clear… except the above statements are either misleading or just plain untrue. The redirector interface was fully present in DOS 3.0, released in August 1984. Also included was the internal DOS services interface (INT 2Fh/12h), support for querying the SDA (Swappable Data Area), and minor other functionality related to networking.

Why do most references get it wrong? Most likely because when IBM released DOS 3.0, the IBM PC Network was announced but not yet available. There simply was no redirector software. By the time the IBM PC Network Program was released, DOS 3.1 was also released and required. There is no known redirector supporting PC DOS 3.0, but that doesn’t mean it can’t be done.

There is at least one reason why redirectors don’t support DOS 3.0. Aside from possible bugs and rough edges, many of the DOS internals that redirectors rely on changed between DOS 3.0 and 3.1 (and then remained quite stable until DOS 4.0).

The SDA in DOS 3.0 was significantly different. Just about everything moved around between 3.0 and 3.1; the general structure was quite similar, but most SDA items were at different offsets. For some reason which may never be known, PC DOS 3.0 included a large country information table in the SDA; as the country table doesn’t change and doesn’t need to be swapped, it was moved out of the SDA in DOS 3.1. Worse yet, OEMs were free (and even encouraged) to modify the list of supported countries, which changed offsets of critical items in the SDA. The DOS 3.0 SDA layout does not appear to be documented.

There were other, subtler differences as well. The List of Lists was laid out differently and the CDS (Current Directory Structure) pointer and LASTDRIVE value were at different offsets.

The SFT (System File Table) format was almost identical, except DOS 3.0 used a word offset into the directory sector instead of a byte index. That shifted the file name storage area in the SFT by one byte.

Due to these differences, any redirector which does not explicitly support DOS 3.0 will almost immediately fail, even if the usual version checks were defeated.

The PC DOS 3.0 kernel (IBMDOS.COM) calls the following redirector (INT 2Fh/11h) sub-functions: 00h, 01h, 03h, 05h-0Ch, 0Eh, 0Fh, 11h, 13h, 16h-19h, 1Ch-22h. This is trivial to verify by disassembling the module. The semantics of the redirector calls appear to be the same as in the later DOS 3.x releases, although that is merely a supposition since no official documentation is available.

Given the internal differences between DOS 3.0 and DOS 3.1+, is it possible to use the redirector interface under DOS 3.0 at all? Yes, it is; the OS/2 Museum adapted the Phantom redirector from Undocumented DOS (2nd Edition) to account for the DOS version differences.

Unfortunately, the Phantom redirector as delivered with Undocumented DOS is somewhat buggy, for reasons that have nothing to do with DOS version differences. For example, the directory search function fails to search directory sectors other than the first; as a consequence, Phantom will never find more than 32 entries in a directory (DOS directory entries are 32 bytes in size and Phantom uses 1K sectors). Another bug causes Phantom to lock up at start-up on many systems because it uses not yet initialized variables when calling an internal DOS function. There are other issues as well.

Due to these problems, the modified Phantom redirector is not currently available as it might destroy data. However, what’s there is sufficient to demonstrate that the redirector interface was, in fact, present in DOS 3.0.

The modifications to the Phantom source code were fairly minor and account for changes in DOS data segment layout and changes in SFT structure. And of course changing the DOS version check. The core redirector logic did not need to be adapted. 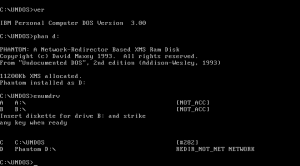 Since Phantom is a TSR, it can be installed and removed at will. It does require a XMS driver, which wasn’t supplied as part of DOS 3.0, but for example HIMEM.SYS version 3.07 (shipped with Windows 3.1) works well.

Once Phantom is installed, a new drive letter “magically” appears. Files can be copied to it, listed, executed, and deleted. Directories can be created and removed. 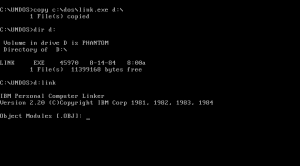 In other words, the redirected drive behaves very much like a local disk, except it can be added and removed at run-time. There are other, subtler differences as well: For example, CHKDSK (predictably) refuses to check the redirected drive, with a “Cannot CHKDSK a Network drive” message. 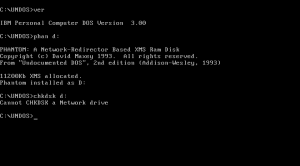 Redirectors in DOS were used primarily for networking, but not exclusively so. A well know redirector implementation is MSCDEX.EXE, the MS-DOS CD-ROM Extensions providing CD-ROM support for DOS. Various drivers for “foreign” filesystems (such as HPFS or NTFS) were also implemented in the form of redirectors.

A major advantage of redirectors is that they can add and remove drive letters at run-time. A redirector can therefore be implemented as a removable TSR.

It should be pointed out that although MS-DOS was rarely viewed as a hotbed of innovation, the redirector interface in DOS 3.0 was state-of-the-art when it first appeared. The first well known VFS (Virtual File System) implementation in the UNIX world was SunOS 2.0, released in May 1985 (shortly after PC DOS 3.1). But the DOS redirector interface had been around, entirely unadvertised, since August 1984.

It is unclear how many other publications clearly recognized that the redirector interface was fully implemented in DOS 3.0. The conventional wisdom clearly was that redirectors required DOS 3.1.

It is also unclear whether there were any redirectors (other than perhaps test code at Microsoft and/or IBM) supporting DOS 3.0. It is presumed that by the time the redirector interface became somewhat known, DOS 3.0 was obsolete and did not merit support.

The oldest known surviving binary of a DOS redirector is REDIR.EXE from November 1984, designed to work with MS-DOS 3.05/3.06. A quick analysis shows that—as the version number suggests—MS-DOS 3.06 is somewhere between PC DOS 3.0 and 3.1 in terms of networking support.

This entry was posted in DOS, Networking, PC history. Bookmark the permalink.

14 Responses to Redirectors and DOS 3.0