The ThinkPad 850 was no ordinary ThinkPad. It was IBM’s high-end portable multimedia workstation, built around a 100MHz PowerPC 603e processor, with a list price of $12,399 (February 1996). The ThinkPad 850 was originally slated (see IBM announcement letter 195-176) to run four major operating systems: IBM’s own OS/2 and AIX, SunSoft’s Solaris, and Microsoft’s Windows NT.

The ThinkPad 850 and its smaller sibling 820 were initially announced in mid-1995 as models 6042 and 6040, respectively. In early 1996, they were relaunched under different model numbers, 7249 and 7247, perhaps to better fit into the RS/6000 numbering scheme. By that time, PowerPC editions of OS/2 and Solaris had been discontinued, and the entire Power Series brand was more or less dead. Not long after, Windows NT for PowerPC was gone, too. With only AIX left, IBM gave up on the idea of PowerPC ThinkPads, slightly refreshed the 850 with a faster CPU and better display, and rebranded it as RS/6000 Notebook 860.

OS/2 Warp, PowerPC Edition was released in December 1995. It explicitly listed the IBM Power Series 830 and 850 as the only supported hardware. Indeed the OS/2 PPC installation CD-ROM does not boot in a ThinkPad 850. Yet a brief glance at the OS/2 PPC files shows that there is support for the Western Digital WD90C24 graphics chips found only on the ThinkPads, and there’s even rudimentary PCMCIA support.

The reason why the installation CD does not boot is trivial—the boot loader is very inflexible and was hardcoded to only support IDE drives; the ThinkPad 850, being a highly exotic system, is an all-SCSI(!) laptop. Yet the installation CD-ROM contains all necessary drivers and configuration files to boot on a SCSI system; in fact IBM’s initial PowerPC development systems, the Power Series 440 (Type 6015, aka Sandalfoot) were SCSI based.

The credit for for figuring out how to make the installation CD-ROM boot goes to Tero Kaarlela. His method involves editing the CD-ROM image, attaching an external SCSI enclosure with a SCSI disk to the ThinkPad, installing OS/2, moving the hard disk into a different system, editing the hard disk contents, and then booting OS/2. Editing the CD-ROM image and burning a modified copy is easy enough. Finding the additional hardware is not.

Fortunately there is a far easier way to do this. The trick is simply modifying the installation CD-ROM in two locations instead of one. That way, the installed OS/2 system will be immediately able to boot from SCSI.

There are several occurrences of PN_BOOT_CONFIG="boot.cfg" in the CD image (PN stands for Personality Neutral, meaning that it refers to the IBM Microkernel itself, not the OS/2 “personality”). At least the first and last of these need to be changed to PN_BOOT_CONFIG="boot.sci". The first occurrence controls the CD-ROM booting; the last affects the installed OS.

Installing the system is very straightforward, as there are not too many options. No multi-booting is supported, as a boot manager for the Power Series systems was never available. 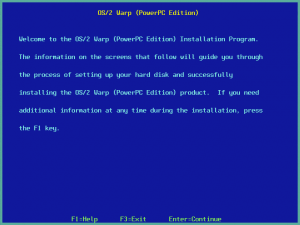 The installation is extremely slow—the ThinkPad CD-ROM is only a double speed model, and has poor seek times. And the OS/2 PPC installer performs an outrageous number of seeks. 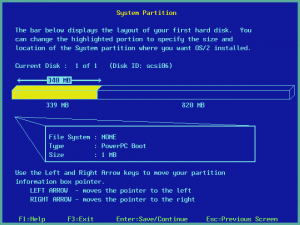 The initial installation creates (not always) a functioning system, but additional components such as the Bonus Pak and extended documentation need to be installed later through the Feature Installer. This is mentioned in the README file.

There is no audio on the ThinkPad 850 under OS/2, unlike on the 830/850 desktops. The fault lies in the inflexible device management. The IBM Microkernel does not perform full hardware discovery and built-in devices are generally described in hardcoded “stanza” files.

Since the audio hardware in the Power Series ThinkPads is extremely similar to the desktops (Crystal Semiconductor CS4232), it should be possible to get it working. Indeed, it only takes editing one text file.

With this trivial modification, digital audio works, at least for output. MIDI playback works as well, using the software synth which unfortunately never made it into the Intel versions of OS/2

How well does OS/2 work on the ThinkPad 850? Not very well. The system is generally somewhat unstable, unlike Windows NT or Solaris. That’s no doubt part of the reason why OS/2 PPC never went anywhere. 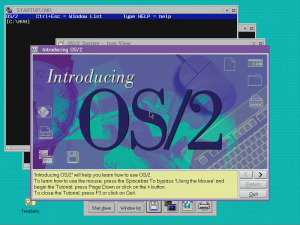 DOS sessions do not work on the ThinkPad. It is unclear where the problem might lie.

The OS dumps an impressive amount of debugging information onto a serial console. That probably contributes to slow boot-up times and generally somewhat sluggish operation.

There’s no networking support in OS/2, since the feature was never finished. Of the four commercial operating systems (AIX, OS/2, NT, Solaris) available for the ThinkPad 850, OS/2 is the least polished and usable.

OS/2 for the PowerPC was a very ambitious project, probably too ambitious. Analyzing the reasons for its failure would be very interesting, but the persons responsible may not have much of an incentive to speak about it…