Of G-Men and Farmers 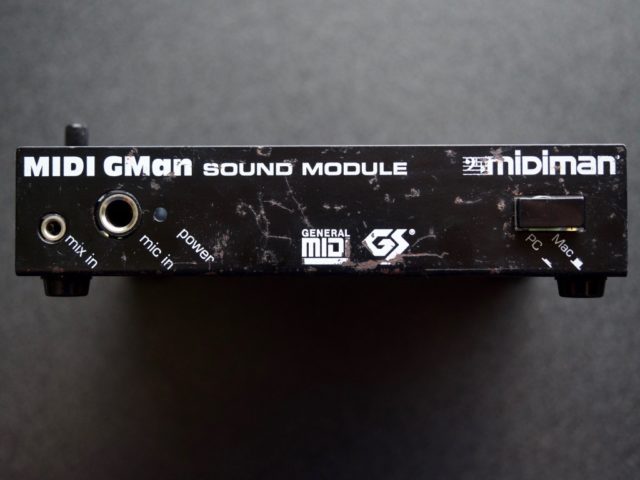 The story of course concerns the famous Sound Canvas sound banks that Dream/Crystal offered for use with the SAM 9203, 9233, and related synthesizers. It was well known in the 1990s that the Dream/Crystal instrument banks sounded just like Roland’s, and that Roland eventually sued them. But the details were not well known, and they’re interesting.

The Roland lawsuit was filed in September 1996 against Midiman, Crystal Semiconductor, and Dream/Atmel. Midiman was the company selling sound modules (specifically the GMan), and Crystal supplied the chips designed by Dream. See below: 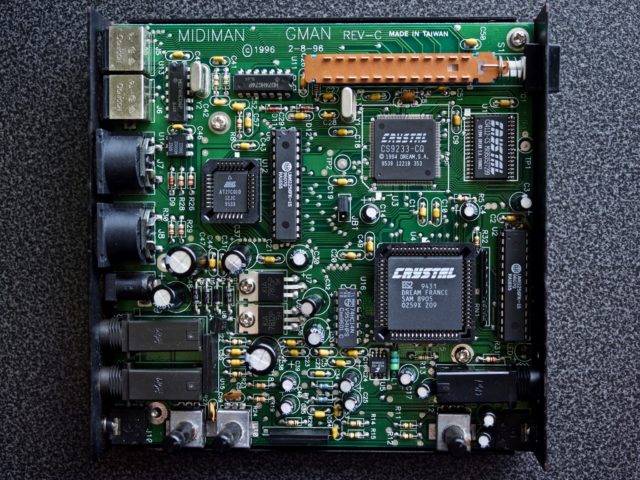 The internals of MIDI GMan

Roland’s main complaint was copyright infringement. Dream apparently used a sampler to record the Sound Canvas instruments and used that as a basis for their sound banks. The Roland v. Midiman case was settled out of court before it was brought to trial, which means there is not much publicly available information about the case.

The Midiman v. Farmers case was a side effect of the out-of-court settlement. Midiman had a commercial insurance policy which would cover damages, but Farmers refused to pay because Midiman did not accept legal counsel provided by Farmers and settled against the advice of Farmers Insurance Exchange. Midiman settled because it didn’t want to incur the legal expenses, but Farmers refused to pay in part because there was no trial.

The Midiman v. Farmers court documents among other things mention the following: “It is undisputed that Atmel-Dream used a sampler to copy the copyrighted Sound Recordings contained in the Sound Canvas, encoded the Sound Recordings onto computer chips, which they licensed or distributed throughout the world[;] ․ that Atmel-Dream entered into a license agreement with Crystal wherein Crystal used the copied Sound Recordings to manufacture approximately one million chips;  [and that] Crystal also sold chips to [appellants] Ryan and Odell, and their company [Midiman] installed the infringing chips into its own sound module known as the ‘MIDI GMan.’ ”

There are some rather interesting tidbits: “Specifically, Midiman contended that the facts would have shown that it had displayed a prototype of the MIDI GMan at a trade show in January 1996. A Roland representative saw and heard the product. Rather than demand that Midiman cease production, Roland instead instructed Midiman on how to correctly display its trademark on the front of the unit.”

That sounds like Midiman displayed the GS logo in good faith, because the GMan was highly Sound Canvas compatible, both in terms of the sound and in terms of functionality (SysEx etc.).

Atmel separately settled with Roland in October 1997 and published a press release. Here is the key part:

“Atmel Corporation announced today the settlement of a copyright and trademark lawsuit filed by Roland Corporation U.S. against Atmel Corporation, Atmel’s French subsidiary, DREAM, S.A., and Crystal Semiconductor. Crystal was a customer of DREAM and Atmel with respect to the products at issue.
Under the settlement, Atmel, DREAM and Crystal have acknowledged the validity of Roland’s copyright in its digital sound recordings. The settlement permits DREAM to sell into the worldwide karaoke, sound card, PC and multimedia markets its existing line of Roland’s GS format compliant products. DREAM has also received an option to license genuine Roland sound recordings for use in new products. It is anticipated that DREAM will exercise that option for its next generation of products, which are required under the terms of the settlement to be compliant with Roland’s GS format for MIDI applications. DREAM’s line of products include digital signal processors (DSPs), which are specifically adapted for sound synthesis and are sold in conjunction with read-only memory chips, capturing the Roland sound recordings.
The financial terms of the settlement are confidential and were not disclosed.”

Evidence of the settlement can be found in the Dream SAM9713 synth chip datasheet from January 1998, for example:

“GMS960800B [sound bank available] with express permission of Roland Corporation, special licensing conditions apply. WARNING: GMS960800B may not be installed in any musical instrument except for electronic keyboards and synthesizers that have a sale price of less than $75 FOB. Using this product in the manufacture of musical instruments or selling this product for use in a musical instrument (other than the exceptions noted above) is a violation of the intellectual property rights of Roland Corporation and will result in liability for infringement.”

Essentially Roland allowed Dream to continue selling the existing sound banks, but only into the markets Roland wasn’t interested in—PC sound cards, karaoke machines, but not musical instruments. Dream quickly developed its own CleanWave sound sets which were free of any alleged Roland intellectual property.

20 Responses to Of G-Men and Farmers