Posted on September 8, 2013 by Michal Necasek

By sheer accident I stumbled on this document. In summary, it’s about a bunch of school kids working on a computer history preservation project and trying to archive a big box of floppies from George Alistair Sanger, a video game composer better known as The Fat Man. And they’re having all kinds of trouble. Inevitably this T-shirt came to mind (and yes, I do have one of those): 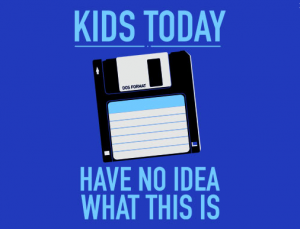 It is is both amusing and amazing to me that someone might have trouble getting data off of a double-density 3½” floppy (Mac-formatted or not), or that anyone would even try getting software like Norton Backup or Central Point Backup running in DOSBox and expecting it to do anything useful.

I am not aware of any emulation/virtualization software which would support direct FDC access that such backup software often requires. It’s simply far too much of a niche market—the vast majority of floppies can be accessed as a straightforward block device, using OS-provided drivers. Supporting FDC register level access would require a completely different approach, taking over the FDC hardware and passing it through to a (single) VM.

It’s not that such technology is impossible. OS/2 2.x supported direct FDC access… but that was at a time when floppy drives were a requirement, not a rarity. Nowadays it’s simply much cheaper and simpler to buy an old PC and install DOS on it for such tasks.

However, the kids’ experience is probably not uncommon, and it does point to two common problems when preserving old data: Reading more or less exotic floppy formats, and extracting files from proprietary archival formats.

Kryoflux or a similar device can probably solve the first problem. It certainly shouldn’t be necessary to have an actual Apple II (or whatever) to read floppies that were used with an Apple II. The other problem may be much easier or much harder to solve. Virtualization and emulation can help with running old software (as long as the software is available!), but if old software needs direct hardware access, emulating it may be impractical. Not impossible, just more work than it’s worth.

This entry was posted in DOS, Floppies. Bookmark the permalink.

22 Responses to Kids these days…