All Windows NT 3.x versions can be used in VirtualBox, although they are not officially supported (unlike all following NT versions) and no Guest Additions are provided. Furthermore, for Windows NT 3.1 and 3.5, an extra step needs to be taken before installation.

In all cases, it’s best to start with a guest configured for NT 4. It is advisable to add a floppy drive and, if audio is desired, use SoundBlaster 16 emulation. USB may be turned off completely since there are no drivers, and the emulated network adapter must be left at AMD PCnet. SMP is not supported.

Unlike NT 4, the Windows NT 3.x installation CDs are not bootable. It may be easiest to start by installing DOS with CD-ROM drivers and running the DOS based installer from the CD. For NT 3.1 that is the only option due to lack of ATAPI CD-ROM drivers. For NT 3.5x it’s possible to boot from floppy images and continue installing from CD.

Windows NT 3.1 and 3.5 installers contain paranoid code which refuses to install the OS on an unknown processor family. The installer will fail if it finds a CPU which isn’t a 386, 486, or a Pentium: 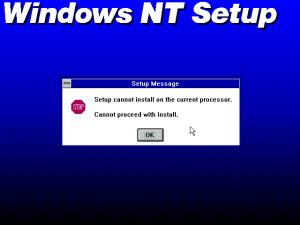 This was a problem back in the mid-1990s when Pentium Pro CPUs came out. Back then the only recourse was editing two .INF files used by the installer by hand. That is possible with VirtualBox, but left as an exercise for the reader. An easier method is adjusting the CPUID information returned to the virtualized guest.

A comprehensive description of CPUID data may be found on Intel’s website as Application Note 485. The following text assumes basic familiarity with the CPUID mechanism.

CPUID leaf 1 contains the processor family and must be adjusted. Only the EAX register value needs to be changed, but VirtualBox overlays entire leaves. This is the command I used on a host with an Intel Core 2 processor:

The VM was obviously named NT3.5. The first argument of –cpuidset is the leaf number, the other four are the values of registers EAX/EBX/ECX/EDX. The EAX value is the crucial one and is set here to 00000543, which corresponds to a Pentium MMX. The last three values were not modified and were taken from the VBox.log file. Near the beginning of the log file, there’s a section listing raw standard CPUID values. The interesting one in this case looked like this:

The ‘Gst’ prefix indicates this is the value reported to the guest. The 000006fb value indicates a Core 2 CPU and is what upsets Windows NT 3.5. The rest doesn’t cause problems and needs no modification. Using the data for a Pentium MMX (for instance) would likewise achieve the desired result. The CPUID override is only strictly required during installation, but running the setup applet will still result in an invalid CPU error if the override is removed.

Windows NT 3.1 is the trickiest to install because it is so old (1993). It won’t recognize more than 64MB RAM, regardless of how much is configured for the VM. It does not come with drivers for PCnet adapter, although a PCnet driver for NT 3.x may be obtained from AMD. On top of that, the TCP/IP implementation does not support DHCP. As mentioned above, there are no ATAPI CD-ROM drivers shipped with the system. Again, third party drivers do exist.

Things are much better with Windows NT 3.5. The CPU overrides are still required for installation, but the OS comes with AMD PCnet drivers as well as ATAPI drivers, and the system supports DHCP. Even better, the installer supports floppy-less operation (WINNT /B).

Windows NT 3.51 is very similar to 3.5, but no longer requires the CPUID overrides. NT 3.51 was released around the same time as the Pentium Pro and the CPU family checks were clearly no longer useful. Because NT 3.51 properly supports PCI, it can be also optionally installed on the emulated BusLogic SCSI adapter in VirtualBox. 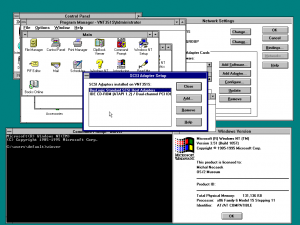 This entry was posted in NT, VirtualBox, Virtualization. Bookmark the permalink.