In 1984, IBM briefly flirted with XENIX, Microsoft’s variant of UNIX licensed from AT&T.  Around 1983-1984, Microsoft and Intel worked on porting XENIX to the 286 processor; Intel shipped XENIX with a number of its development systems in the mid-1980s.

A good description of IBM’s flavor of XENIX may be found in the IBM Personal Computer Seminar Proceedings, Volume 2, Number 9, published in November 1984. The OS/2 Museum recently obtained a copy of this booklet, which is now being made available in PDF format. 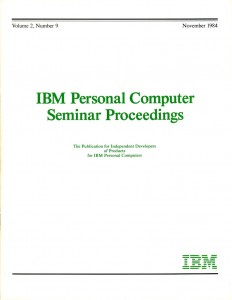 XENIX may have been the first multi-tasking, multi-user, protected-mode operating system available for the IBM PC/AT, and for the PC family in general. However, it was neither the first nor the last UNIX variant which IBM made available for the IBM PC. The first was PC/IX (developed for IBM by INTERACTIVE Systems Corporation, or ISC), designed to run on the PC/XT. XENIX was in turn followed by AIX (likewise developed by ISC), first available on the RT PC, and later on PS/2 and RS/6000 systems.

The IBM PC XENIX was based on AT&T’s UNIX System III (rather than the newer System V) with a number of BSD enhancements. The latter included vi, C shell, and termcap/curses. Microsoft also implemented several enhancements, such as the ability to read and write DOS file systems.

Much like other Xenix variants before and after, IBM PC XENIX was optionally shipped with Text Formatting System (TFS) and Software Development System (SDS) packages. The TFS was based on the classic nroff/troff formatters and associated utilities. The SDS included a compiler, assembler, debugger, and assorted development tools like SCCS and make.

One of the Microsoft-specific enhancements was the ability to cross-compile to DOS using the SDS. The XENIX to DOS cross-development capability was likely frequently used internally at Microsoft in the mid-1980s.

The IBM PC XENIX came with rudimentary networking capabilities, namely uucp and micnet, though little is known about their specifications.

The IBM PC XENIX was hardly a successful operating system, and is much less well known than the Xenix variants sold by Microsoft/SCO. It is likely that IBM had little incentive for a strong UNIX push, as AT&T was at the time considered a potentially very serious competitor (which it turned out not to be, but that’s a different story).

This entry was posted in IBM, Microsoft, Xenix. Bookmark the permalink.