Do You Know This Sound Card?

The guessing game is back, this time with a twist: I don’t know the correct answer. A generic-looking 1997 vintage sound card recently showed up: 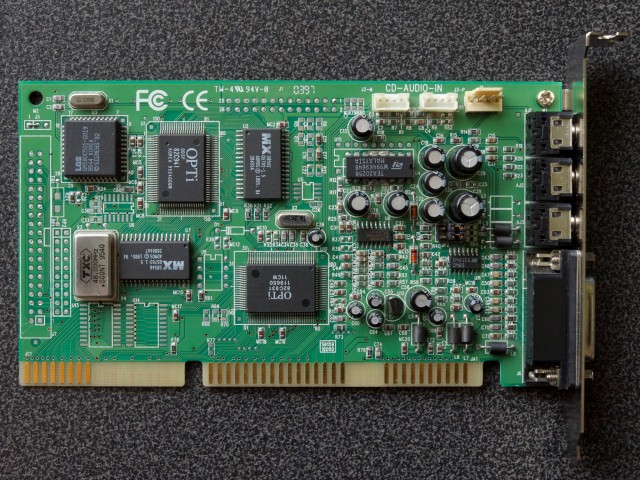 This is what I call a high-end low-end card… it’s a standard low-end sound card, except it also includes a low-end wavetable synthesizer, which makes it a better class of a Made in China cheap card.

The board has more or less zero distinguishing marks. There is no FCC ID, no obvious model number, no manufacturer designation. A tiny ‘S6159’ near the ISA connector may or may not mean something.

On the other hand, the card is highly recognizable. While clone cards with the OPTi 82C931 integrated audio controller were dime a dozen, the OPTi 82C941 QDSP wavetable synthesizer was anything but common. The 931+941 combination is more or less unique.

The card was produced in early 1997 and also contains a LGS-made (LG Semiconductor) GMS80C501 microcontroller and two MX-branded (Macronix) ROM chips. The ROMs also bear ADMOS copyright and are labeled QS702-1.5 and QS703-1.5 (presumably two halves of a set). The wavetable synth is very likely closely related to ADMOS QDSP 700 and 1000 series chips.

For good measure, this is what the backplate of the card looks like: 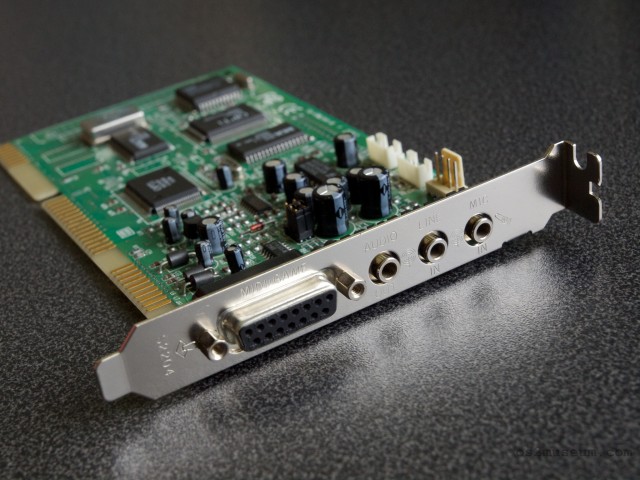 There is only one audio output plug and the card has jumpers to select between amplified and unamplified output (a not very user-friendly feature of many cheap sound cards).

The card works with generic OPTi 931 DOS drivers, although for some reason the synth won’t produce any audible output until Windows 3.1 plays something over the MPU-401 interface. Some tiny bit of initialization is probably missing in the generic DOS driver. Card-specific drivers might help… if I knew what this card was in the first place.

The wavetable synth is a “real” MIDI device and does not need any TSRs or other special support, it simply responds to data sent over MPU-401. The LGS microcontroller is presumably responsible for that.

So… what is this card and who made it?

Update: As is apparent from the photo, a variant of the board may have existed which also included an IDE connector. The PCB could also clearly be used to manufacture a card with a Waveblaster header, but such card would almost certainly omit the wavetable synth—and could plausibly have been sold under a completely different brand.

Later Update: After staring at the SOUND16.CFG file long enough, I guessed how to make the wavetable output work in plain DOS, without starting Windows first. By default, the OPTi 931 controller’s “synth” DAC only takes data from the built-in FM synthesizer. It is necessary to allow the DAC to also accept data from the OPTi 941 wavetable chip. The FDAC_SRC line in SOUND16.CFG needs to be changed from FDAC_SRC=OPL3 to FDAC_SRC=SHARED. The ‘MIX’ setting could possibly work as well.

Final Update: The card has been positively identified as a Trust Sound Expert de Luxe Wave 32 3D (article no. 09245).

13 Responses to Do You Know This Sound Card?