A depressingly yellowed Roland CM-64 led me to try retr0bright for the first time. The short story is that despite a few minor missteps, the experiment was a success. Yes, it really does work! Here’s what the CM-64 looked like (bottom), for comparison next to a much better preserved Roland CM-300 (top). 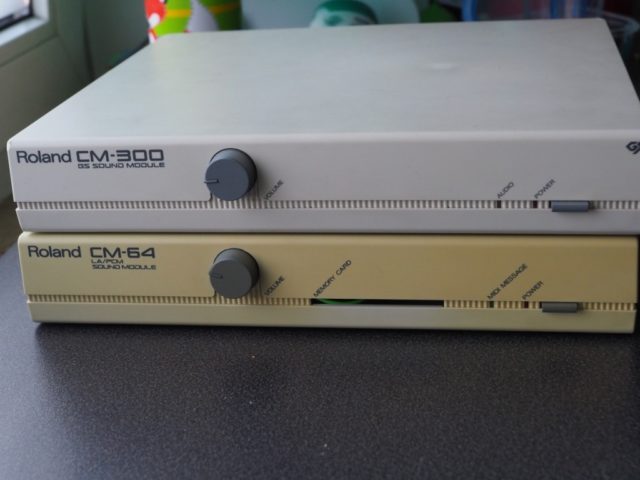 I followed the original recipe using 11.9% hydrogen peroxide stabilized with etidronic and phosphoric acid. The problem was that either I used too large spoon or misjudged what a “heaped tablespoonful” means. I ended up with too much Xanthan gum which a) caused severe difficulties for the blender, and b) resulted in a very thick and clumpy gel instead of a smooth substance.

Too much Xanthan gum then led me to add more peroxide and glycerine and I ended up with more gel than I wanted to, and I believe it still didn’t have the right consistency. Lesson learned, it’s better to start with less Xanthan gum and add more if necessary.

I stored most of the gel in a jar and mixed a small part of it with Oxy, then applied on the CM-64 with a popsicle stick (not ideal but it worked quite well). It has to be said that developing retr0bright in gel form was very clever because the gel very easily gets in various nooks and crannies, but does not require potentially large parts to be submerged in liquid.

Good for me because I failed to entirely remove the CM-64 case. The volume knob wires didn’t want to detach from the knob itself and I didn’t want to break the seal on the nut holding it in place.

The recipe says that “a day or so later, your parts should be as good as new”. To my shock, after about an hour in the sunlight, the retr0bright effects were already very obvious. I don’t know if the (almost) 12% peroxide solution speeds up the process or if the Sun’s UV radiation was so insanely strong on a clear June day. The brightening only needed a few hours.

I also tried a couple of other noticeably yellowed items and can confirm that heavily discolored plastic needs more than one go with retr0bright. But it really does work, and it really does make the plastic look like new. It’s amazing. Thank you, Merlin!

This is the end result: 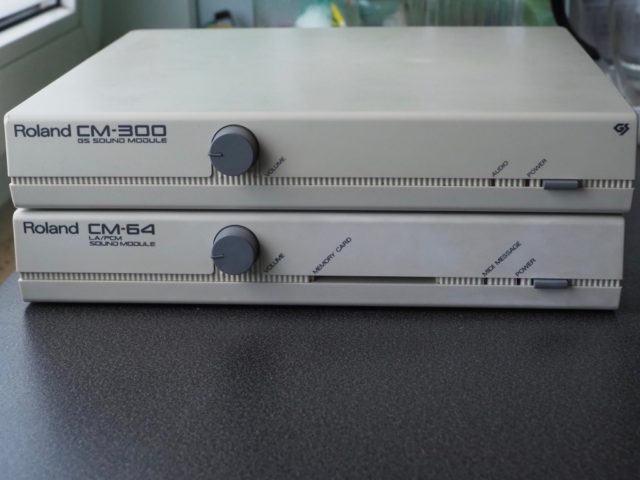 On top is the very same CM-300, which now looks slightly dingy compared to the brightened-up CM-64! Interestingly, even the volume knob on the CM-64 looks better after retr0bright treatment, it is now pure gray instead of the original slightly brownish gray.

The peroxide solution is surprisingly non-reactive. It never visibly reacted with anything and had no visible impact on plastic, glass, or metal. Using a kitchen blender for mixing was not an issue. However, there was a distinct smell of ozone next to “working” retr0bright.

Neither peroxide nor the retr0bright gel should be touched with bare hands. It is not horribly toxic or corrosive, and a small splash that’s immediately washed off probably won’t do real harm, but even slightly prolonged exposure will leave marks on the skin. Gloves and glasses are a must.

Simply smearing the gel on the subject with a glove worked pretty well. The gel sticks nicely and does not drip.

If the gel completely dries out, it’s very easy to remove (it mostly peels off the plastic). Otherwise it can be washed off. When it’s dried out, it’s just the Xanthan gum with a tiny bit of glycerine, both food grade ingredients.

I don’t know how long it takes for the activated gel (with Oxy) to dissipate all hydrogen peroxide, that is, how long it takes before the remains of the gel are entirely harmless. I assume that once the gel is dried out, there can’t possibly be any peroxide left. Experience so far indicates that the gel can be active after more than 24 hours, especially if it was not exposed to light.

What readers may not know that the CM-64 in fact contains the CM-32L and CM-32P boards sandwiched together. Here is the LA board part number: 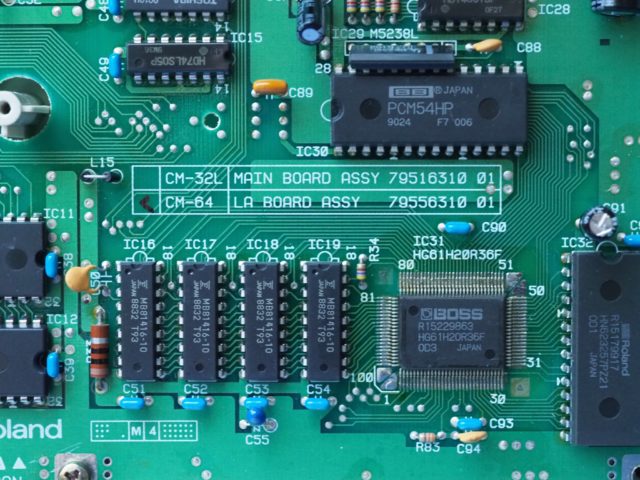 The same PCB was used for CM-32L and the LA portion of the CM-64, but the parts soldered on the PCB were not the same. A CM-32L board (as well as a CM-32P board) would have all MIDI and audio connectors soldered on. In the CM-64, the LA board has the MIDI connectors but not the audio jacks: 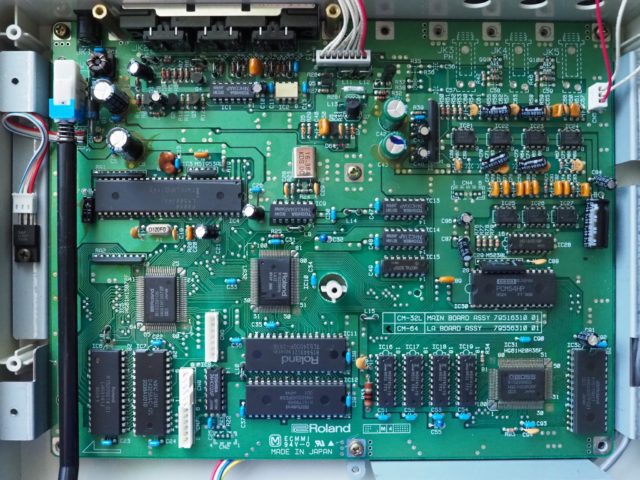 And conversely, the PCM board, which uses the same PCB as the CM-32P, has the audio jacks soldered on but no MIDI: 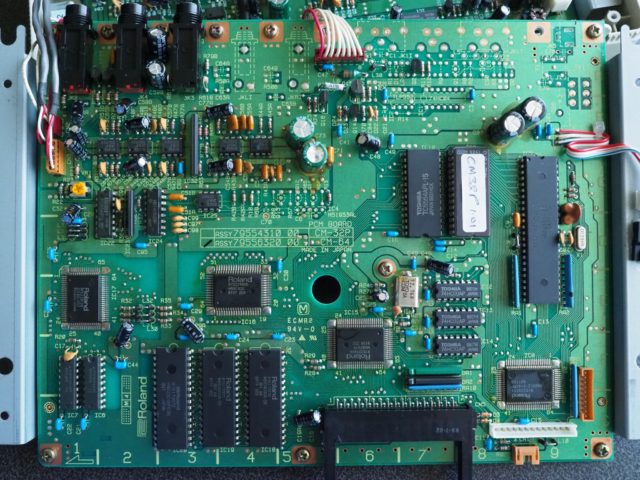 Actually it only has three out of five jacks soldered on—the CM-32P had two additional audio input jacks for passing through the output of a, say, CM-32L.

It is interesting that the CM-32L and CM-32P, the boards were mounted the same way as in the CM-64: Component side up in CM-32P, component side down in CM-32L. As a result, the power jack on the rear of the unit is located at a different height on CM-32L vs. CM-32P.

The LA and PCM portions of the CM-64 are independent synthesizers. They share power, MIDI input, audio output, and volume control. Both have their own CPU, control ROM, synthesis circuitry, and DAC.

And finally, in case anyone is as confused as I was: The CM-64 (or CM-32L, or MT-32, or CM-32P) does not respond on MIDI channel 1. It was designed to be used as a sound expander together with a master instrument on MIDI channel 1. As a result, some basic MIDI setups will produce no sound with the CM-64. Any MIDI files designed for the MT-32 take this into account.

This entry was posted in Fixes, Hardware Hacks, Roland. Bookmark the permalink.

7 Responses to Brightening Up