A Word on the CALL 5 Spell

After years of searching for some reasonably widespread DOS application which used the CP/M-style CALL 5 interface and coming up with absolutely nothing, Jeff Parsons of pcjs.org found one: None other than Microsoft Word, specifically the spell checker in the DOS-based versions of MS Word 2.x and 3.x. These versions were sold roughly from 1985 to 1987. 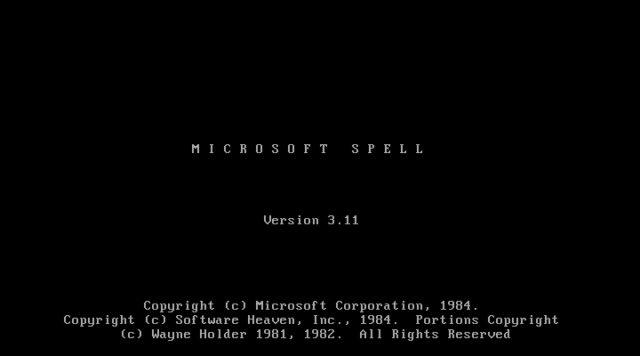 What’s significant is that Word 2.x/3.x was obviously Microsoft’s own product, and was sold and supported during the years when OS/2 was in development (and OS/2 needed to manipulate the A20 line) and high memory (HMA, managed by HIMEM.SYS) was on the drawing board. Much like EXEPACK, Microsoft Word 2.0 for DOS actually post-dates the IBM PC/AT with its A20 gate circuitry. It is highly probable that no one at Microsoft even realized the dependency of the MS Word 2.x/3.x spell checker on the A20 gate until years later.

The spell checker was licensed from a 3rd party, Software Heaven, Inc. Besides the actual spell checker (SPELL.COM), there were several other utilities for anagram pattern searching (ANAGRAM.COM), word lookup (LOOKUP.COM), automatic correction (PROOF.COM), word counting (WC.COM), word search (WORDFIND.COM), and word frequency analyzer (WORDFREQ.COM). All these utilities used CALL 5. The utilities bear a 1981, 1982, and 1984 copyright, suggesting that some of the code was likely written in the very early days of the IBM PC. It is worth mentioning that unlike EXEPACK, the spell checker used CALL 5 the whole time it was running (for input and output), not just during initialization. It was not enough to just disable the A20 gate for the first N calls. On the other hand, the CALL 5 interface works just fine with the A20 gate enabled as long as the appropriate code is copied from linear address C0h to linear address 1000C0h.

And now a trivia question: What does the CALL 5 use in MS Word have in common with the ground-breaking Dungeon Master video game? The answer is Wayne Holder, the founder and owner of Software Heaven (makers of Word Spell) and FTL Games (makers of Dungeon Master).

This entry was posted in DOS, Microsoft, PC history. Bookmark the permalink.

10 Responses to A Word on the CALL 5 Spell