A Tale of Two Displays

Posted on November 8, 2014 by Michal Necasek

By sheer coincidence, two new computers arrived in my family at almost the same time, and they couldn’t be more different. At first sight, the most striking difference is the quality of their displays, and it says a lot about the state of the computer industry today. 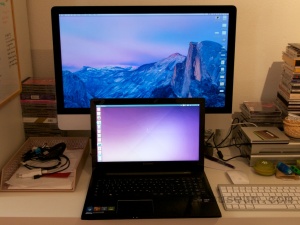 The first system is a Lenovo Z50-75, a cheap laptop purchased because the OS/2 Museum needed a modern (but not necessarily fast) AMD processor. The CPU is an A10-7300, a low-performance, low-power “APU” with four CPU cores and six GPU cores. In general, the laptop is pretty good for the price, but has one huge downside: The display.

For some reason, PC laptop manufacturers decided that whoever wants a laptop with an AMD processor, or a lower-end Intel processor, must suffer a terrible 1366×768 so-called “HD” display (this is not something specific to Lenovo).

And I mean terrible. The awful resolution is just the beginning. Laptops commonly had 1024×768 displays what, 15 years ago? This is the same, just widescreen, and the extra width helps very little. And this is a 15″ screen, not exactly small. In and age when most smartphones and tablets have resolutions higher (even much higher) than 1366×768, this is just laughable.

The display is of course glossy (nowadays more accurately called “glare”) but that I could live with. What’s much worse is that the display has rather poor contrast, and as if that weren’t enough, it has noticeably fewer than 8 bits per color channels. For example the Ubuntu default background with very fine gradients looks quite bad on this display.

In short, the display is garbage, probably fine for a cheap little TV but inadequate for a laptop. But the worst thing is that there is simply no other choice. All PC manufacturers are pushing such junk on users and if one wants a better display, it means a very different price range.

I should point out again that I’m quite happy with the laptop overall. It’s remarkably quiet, it doesn’t run too hot, and the performance is very decent for the price. It was very easy to upgrade memory on the unit (it supports up to 16GB). But the display is very much the weakest link. Well, perhaps with some competition from its UEFI implementation, but that’s a tale for another day.

Displays with high pixel density are old news (although not in the world of low-end PC laptops!), but there’s a difference between a 15″ and 27″ HiDPI screen. On the iMac, it’s possible to display an A4 or letter-sized page (easily two pages facing each other in fact) at 1:1 scale with a level of detail that rivals print. This is wonderful for reading PDFs.

Needless to say, this display is excellent for image and photo processing. 10+ MP photos look as good as medium-size prints, and it’s very easy to compare sharpness and detail.

Is the iMac expensive? You betcha. But at this point, there’s simply no real competition. In fact it’s rather interesting to reflect at the unwinnable race to the bottom that the PC manufacturers are engaged in, while Apple sells overpriced systems in a market segment it has completely to itself.

This entry was posted in Apple, Graphics, PC hardware. Bookmark the permalink.

10 Responses to A Tale of Two Displays