Intel had a long history of offering retail processor upgrades for PCs. The last and by far the best known of those were the Intel OverDrive processors. But let’s start with the earlier history.

In 1992, Intel offered RapidCAD, a two-chip (for the CPU and FPU sockets) upgrade for 386 systems. The RapidCAD used a somewhat crippled 486 core with integrated FPU and although it didn’t greatly improve integer performance, it did significantly increase the floating-point power (70% improvement according to Intel) to overtake any discrete 387.

When Intel introduced the i486 in 1989, the benefits (for Intel) of segmenting the market with SX and DX variants were well understood. Whereas the 386DX (1985) used a 32-bit external interface and the 386SX (1988) a 16-bit one, the 486DX and 486SX were almost identical in terms of external interface. The DX variant included a built-in FPU, the SX did not. 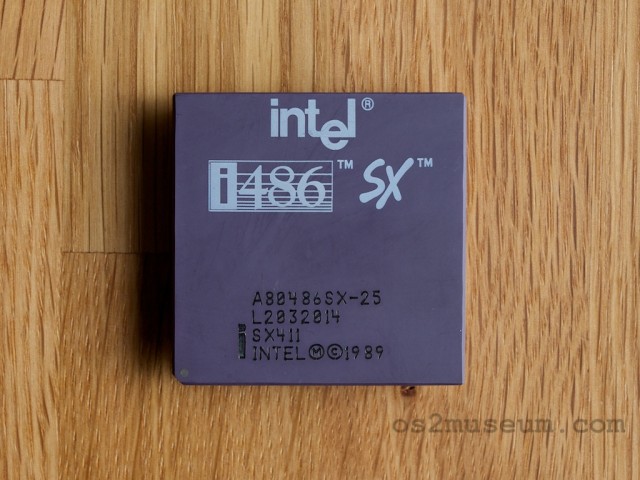 The 486SX was introduced in mid-1991, and its main purpose was to compete with faster 386 systems, especially those from AMD. At that time, the vast majority of software did not require a FPU, and most software didn’t use one even if available. Although the 486 had considerably better performance per clock, a 40 MHz 386 compared quite favorably to a much more expensive 25 MHz 486. The 486SX was intended to get OEMs to roll out 486 CPUs (which only Intel produced at the time) in larger numbers, understandably at prices lower than the top-of-the-line DX variants.

Intel had had a good experience selling retail math coprocessors (387DX and 387SX, 287XL) and decided to continue the tradition with the 486SX. Intel recommended that 486SX systems be equipped with a “Performance Upgrade Socket” (yes, that makes the acronym PUS) for an 487SX—a sort of a math coprocessor.

The i487SX (also introduced in 1991) was not an FPU, it was an entire replacement CPU+FPU. That is logical because one of the 486DX’s benefits was the integrated FPU, considerably faster than the separate unit in 386 and earlier systems. In a system with 487SX installed, the 486SX was disabled and the 487SX took fully over. From a software perspective, a 487SX equals a 486DX. Is that obvious enough?

The 487SX wasn’t a particularly popular product. Users who bought a 486SX in 1991 because they didn’t need the FPU probably still didn’t need the FPU in 1992, or didn’t want to spend several hundred dollars on it. But the upgrade socket was inviting. 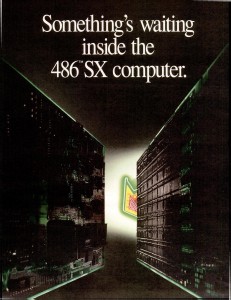 In early 1992, Intel ran a teaser ad campaign promising wonders to come in the shape of upgrade processors pluggable into the upgrade socket of 486SX systems.

In mid-1992, Intel rolled out the OverDrive line. This coincided with the introduction of the DX2 clock-doubled 486s. The initial OverDrive processors were essentially retail versions of the i486DX2 (which was only available to OEMs). Encouraged by the ‘487SX’ moniker, Intel continued the tradition of giving the retail products confusing names. Thus for example the entry level ODP486SX-25 was neither an SX nor a 25 MHz processor but rather a 486DX2-50. 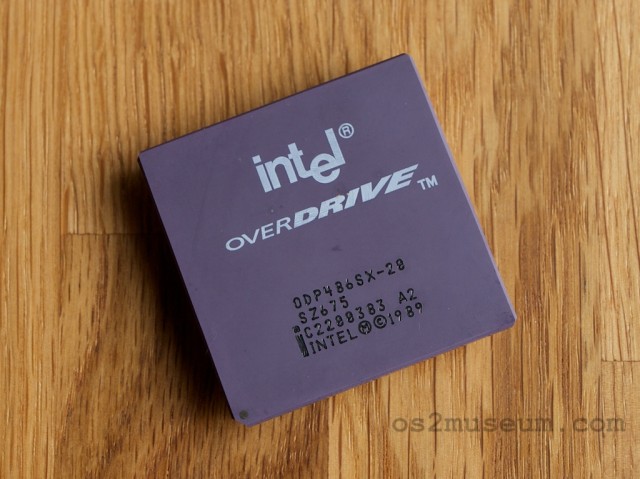 The lowest end model was an OPD486SX-20, a 40 MHz clock-doubled model. This part was atypical in that it had no heatsink and there was no DX OverDrive variant (since there was no 20 MHz 486DX). The OEM counterpart (486 DX2-40) was rather uncommon. 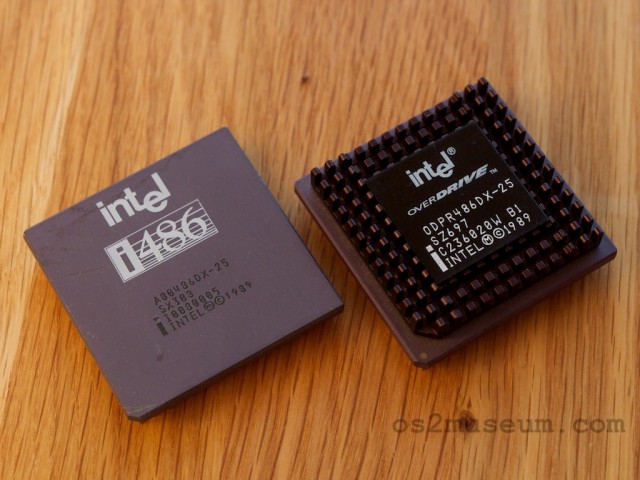 Probably because it seemed to be a good idea, Intel initially named the OverDrive processors based on what they were meant to upgrade from, rather they would upgrade to, as all later OverDrives did.

The OverDrive line took an advantage of an event that was very rare indeed: By doubling the internal CPU clock, the 486 performance was massively increased (up to 100%) without any changes to the external CPU interface. This was made possible largely thanks to the 8KB internal cache which ran at the internal clock speed and masked slow memory access. 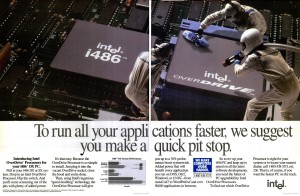 The 169th pin had no electrical function; it merely prevented the user from inserting the CPU the wrong way. Standard i486 processors (SX and DX) used a 168-pin PGA socket designed for factory or professional installation, with no key pins. That was a problem for a retail product and an extra pin was added to save Intel trouble with returns caused by incorrect installation. 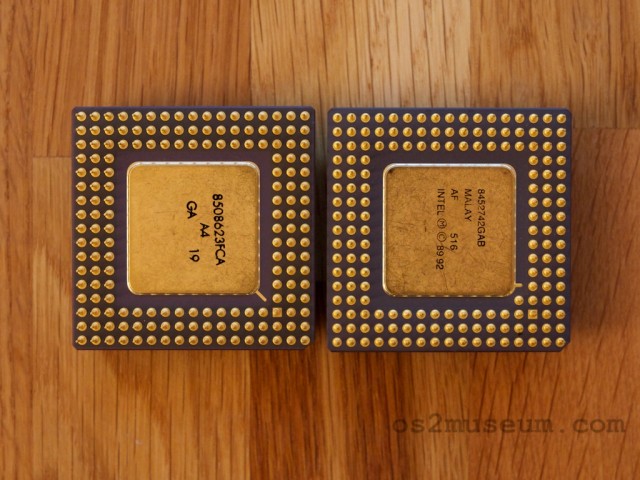 The OverDrive CPU also had a special UP# (Upgrade Present) pin which, when active, was intended to get the original processor “off the bus” and let the OverDrive take over. This was a continuation of the 487SX tradition, much like the extra pin.

But what about existing i486DX systems? Those had no extra socket and already included an FPU, but the clock doubling was still just as attractive. For those systems, the ODPR variant used the standard 168-pin interface. The original processor had to be removed (and would be likely resold), which was trivial with ZIF (Zero Insertion Force) sockets but not the LIF (Low Insertion Force) sockets found in earlier 486 systems. Intel shipped OverDrive processors with a CPU extraction tool for that purpose. For future systems, Intel specified an upgrade socket for i486DX systems and suggested a circuit that disabled older i486DX CPUs (which, unlike the SX variant, had no UP# pin for that purpose). 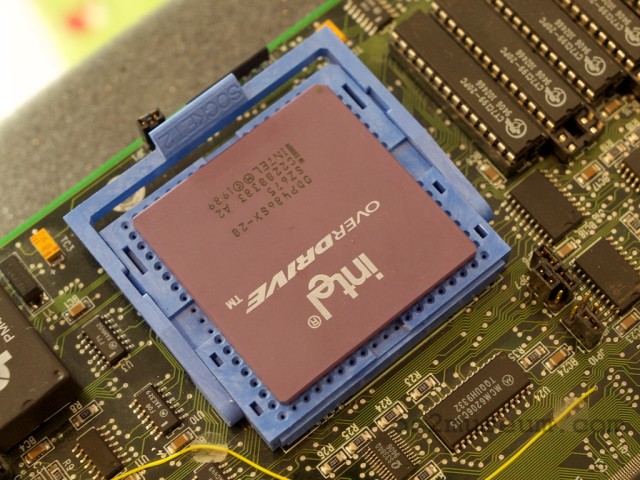 Intel changed the OverDrive processor designation around 1994. A 66 MHz clock-doubled 486DX was now called DX2ODPR66 (rather than ODPR486SX-33).

The 66 MHz OverDrives were still mechanically and electrically very similar to their standard OEM brethren, but always came with a heatsink and logo. 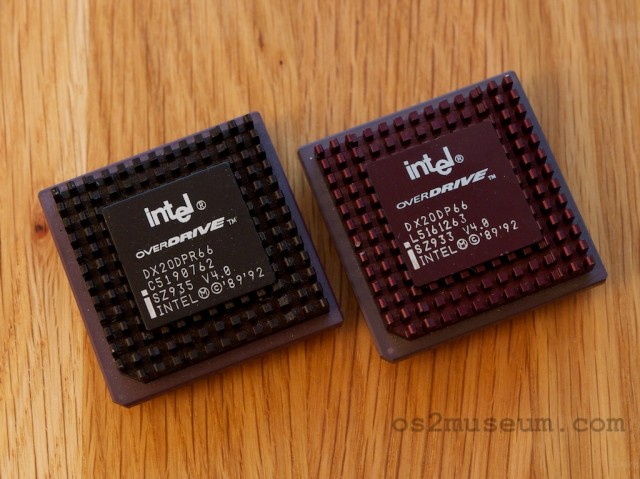 The 66 MHz DX2ODPR66 processors are probably the most widespread OverDrive of all times. 33 MHz 486s sold in good numbers (more so than the very expensive earlier 25 MHz models) and once again, a clock-doubled CPU was a very attractive upgrade.

Things started getting technically interesting with the IntelDX4 OverDrive, introduced in late 1994. The standard DX4 variants were designed for 3.45V operation and thus could not be installed in an older 5V-only socket.

For that reason, the IntelDX4 OverDrive includes a built-in voltage regulator as well as a heatsink. The heatsink is noticeably taller compared to the earlier DX2 variants. The internal CPU clock is tripled, either from 25 to 75 MHz or from 33 to 100 MHz. 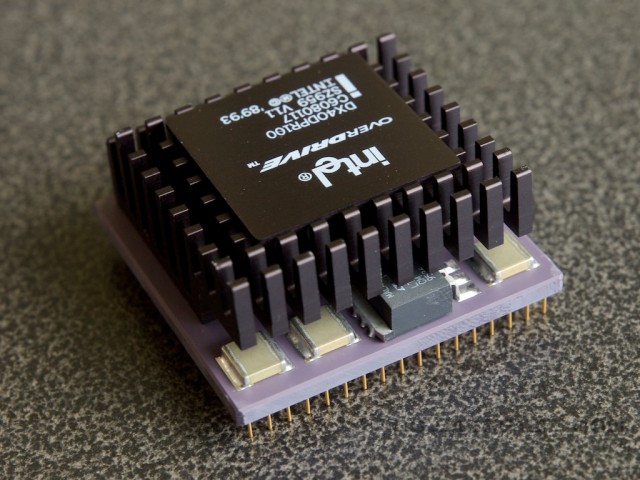 The 100 MHz DX4 OverDrive, also known as DX4ODPR100, was a very good upgrade for older 5V-only boards. Yet it was nowhere near as popular as the earlier DX2 OverDrives. One of the reasons was that many newer boards supported 3.45V operation and a plain DX4 was much cheaper than the OverDrive variant. 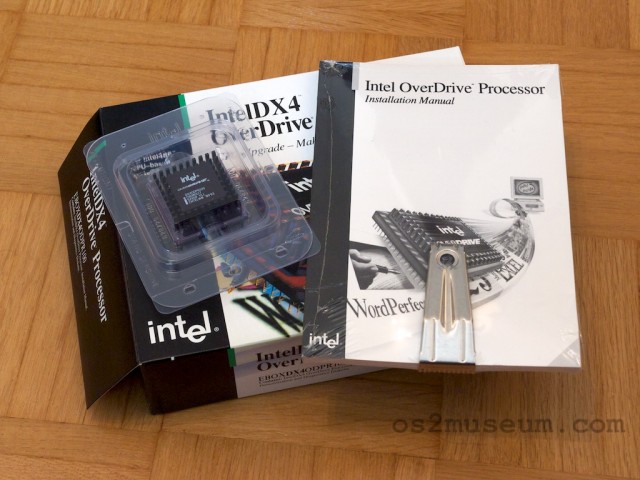 The DX4 OverDrive also had to compete with Cyrix/IBM/ST 5×86 and especially AMD’s “5×86” (clock-quadrupled 133 MHz 486). And at least to some extent with Intel’s own Pentium OverDrive.

Judging from how easy they are to find nowadays, the DX2 OverDrives must have been by far the most popular of the OverDrive line. However, easy comparison cannot be drawn to later processors because initially, the only Intel CPU available in retail was an OverDrive. Later on, “boxed” versions of standard Intel processors came on the market. Nevertheless, 486 OverDrives, although never cheap, brought a sizable performance gain in a timely manner with 100% compatibility and minimum hassle. That was usually not the case with the OverDrive line.